THREE STEPS TO BECOMING AN MMA FIGHTER-
STEP 1: Search for a school in your area at FightResource.com
STEP 2: Learn and train hard at the school you’ve found.
STEP 3: Ask your school’s instructor to find you a fight at a local event.


One of the things that you have to avoid, or rather, one of the things that you have to understand, is that Amateur MMA is not an amateur sport as most people understand it. USA Boxing and the Golden gloves run boxing, and the purpose of those two organizations is to build the character of the participants and to create a team to represent the United States of America. That’s not what’s behind Amateur MMA. Amateur MMA is done by the exact same people that are doing Pro MMA, and their single purpose is to make money, and they make money by putting asses in seats, and they put asses in seats by getting easy fights for good ticket sellers.

Again, that gets back to why you don’t want to try to do this on your own, in your garage, or likelier than not, you’re going to get eaten up. You want to find a gym with experienced trainers; the gym doesn’t have to be fancy but it does have to have experience.

~Kirik Jenness
• Coach at New England Submission Fighting
• Commissioner of NAGA
• Former referee for Reality Fighting MMA events
• The certified MMA records keeper for all sanctioned fights in the USA.
• Co-founder & President of The Underground Forum and The UG Store
• Author of the Fighter’s Notebook
• Co-Author of the 1001 Submissions manual
• Involved in Mixed Martial Arts since 1994
• Involved in Martial Arts since 1971

Currently listing 3441 MMA schools in the USA.
Is your school, gym, or dojo on the map?

TOE HOLD FROM TOP HALF GUARD 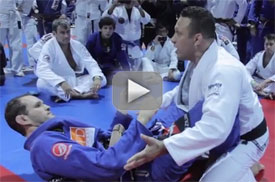 OTHER PLACES WORTH A LOOK

•  How do I get into the UFC?
•  The Underground Forum
•  Ultimate Fighting Cartoon videos